Assist your diet by eating eggs for breakfast 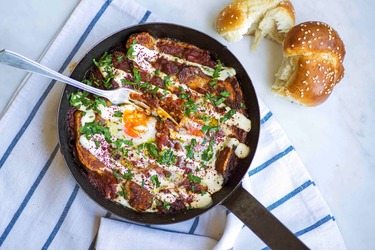 Some folks from the University of Connecticut hypothesized one day that an egg-based diet would help control appetite throughout the day better than a bagel-based breakfast. Scientists being scientists decided to test this theory in twenty-one men to see if they were right. The egg breakfast was made up of just over half fat, and the bagel breakfast was about three-quarters carbohydrate. The satiating effect of fat is fairly well known, and the researchers figured that starting the day with a higher fat intake would reduce the number of calories taken in over the rest of the day. To assess this, the participants kept food diaries. The cool thing is, they didn’t just take the participants at their words – they took blood samples of blood glucose, insulin and appetite hormones like the hunger-stimulating hormone ghrelin. Baseline readings were taken in a fasted state, and then again at strategic intervals after the ingestion of the meal including thirty minutes, one hour, two hours, and lastly three hours after eating.

What was found was that an egg-based breakfast was much more filling and also satiated the participants for longer than a bagel-based breakfast. It also resulted in the participants consuming fewer calories over the entire course of the day. So if you’re dieting down and struggle with raging appetite, this is something to look into. Now, I could tell you about the results of the egg and bagel-based breakfast, but that may blow minds and impregnate women within a three mile radius. It would also be a complete fabrication but I’d be interested in seeing how it faired against the egg-based meal. Plus, egg bagels are great.